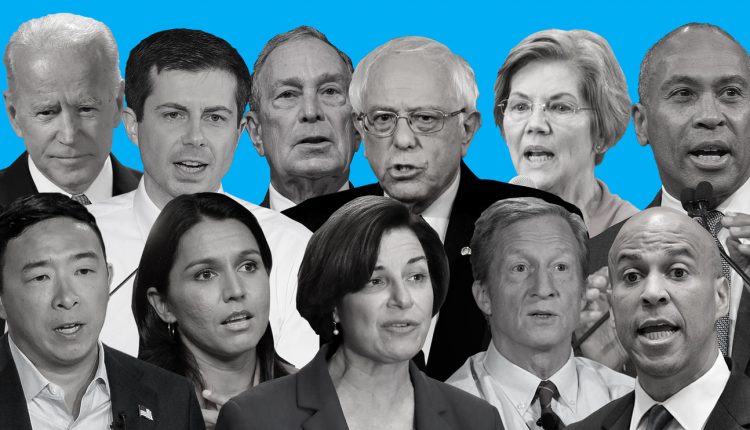 A handful of 2020 Democratic presidential hopefuls are preparing to square off in Des Moines Tuesday night in the first debate of the year, but the field still numbers more than a dozen as primary season is set to begin.

Thirteen Democrats are vying for the party’s nomination with the Iowa caucuses less than a month away. The field shrank by one on Friday as author Marianne Williamson ended her campaign, saying she didn’t want to make it harder for a progressive to win.

Former Vice President Joe Biden continues to lead the pack in national polls, though ex-South Bend, Ind., Mayor Pete Buttigieg and Sen. Bernie Sanders outrank him in surveys focused on Iowa, which has a critical role thanks to its first-in-the-nation caucuses. Sen. Elizabeth Warren has dropped to fourth in Iowa polling, and she also has lost ground in national polling, giving up the No. 2 spot to Sanders.

Opinion: Mike Bloomberg: Trump has been great for people like me — but I’ll be great for you.

Steyer late Thursday became the sixth candidate to qualify for next week’s debate, where he will join Biden, Buttigieg, Sen. Amy Klobuchar, Sanders and Warren on stage.

The other Democrats seeking to take on President Donald Trump next year include entrepreneur Andrew Yang, Sen. Michael Bennet of Colorado and Rep. Tulsi Gabbard of Hawaii.

Read more: Some Democratic presidential hopefuls are angling for the vice president slot — a gambit that rarely pays off

After the Iowa caucuses, focus will shift to the New Hampshire primaries and beyond, as candidates aim to pick up the 1,885 delegates to secure the Democratic Party’s nomination.

Now see: Here are the dates for this year’s presidential primaries and caucuses.

Here is the MarketWatch list of contenders and the status of their candidacies, based on their statements:

From Asia’s second-worst performer in 2019, Rupee may beat most of its counterparts this year