Menu ‘She found out she would be a civil servant in a tiara.’ How #Megxit will make Meghan and Harry rich beyond their wildest dreams - Jobs Magazine

‘She found out she would be a civil servant in a tiara.’ How #Megxit will make Meghan and Harry rich beyond their wildest dreams 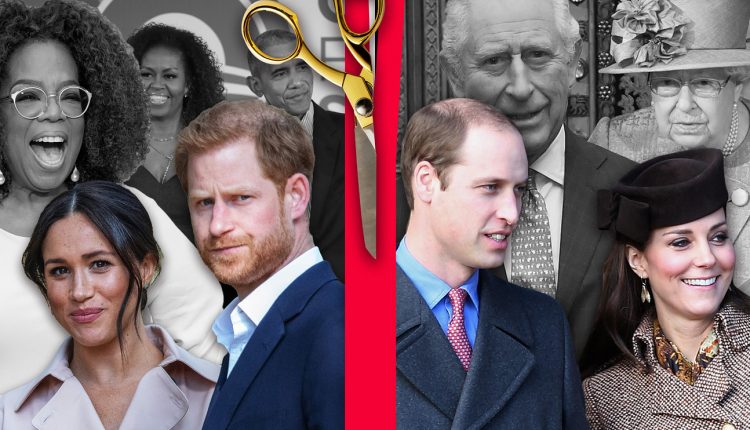 It’s been said that behind every great man is a great woman. In Prince Harry’s case, it’s three wealthy and media-savvy women.

Harry and Meghan Markle announced Wednesday they “work to become financially independent” and live between U.K. and North America. Free from the ribbon-cutting duties of royal life, the Duke and Duchess of Sussex are on the brink of becoming a global-media, royal hybrid power couple. Their Instagram


Netflix would give the Sussexes a platform of 158 million paid subscribers and be a coup for the streaming service.

Harry receives an income from his father Prince Charles, and he is expected to hash out financials with his father. Harry, who is already worth several million dollars, owes his fortune to three famous women: his mother, the late Princess Diana, who became a global superstar; his grandmother, Queen Elizabeth II, and his wife, Meghan Markle, an American-born self-made former actress.

Markle flew back to Canada Thursday amid reports she was driven out by, among other things, press coverage regarded as both overtly and covertly racist. Harry has stayed behind for crisis talks with Prince Charles, and Queen Elizabeth, who has reportedly directed the offices of Charles, Prince William and Harry to reach a deal before Harry’s first public appearance on Tuesday.

Multiple newspapers, including the Daily Telegraph in the U.K., have reported that the queen was “disappointed” with the surprise announcement, and had asked the Sussexes to hold off on issuing a statement. When The Sun newspaper published a front-page story that the couple was contemplating a move to Canada, the Sussexes pushed the button on their statement.

On Saturday, the Telegraph, citing a palace source, reported: “The family will gather on Monday at Sandringham to talk things through. The Queen, the Prince of Wales, the Duke of Cambridge and the Duke of Sussex will meet for the first time.” It will follow a series of meetings and consultations over the last few days and Meghan will, time permitting, join the meeting by phone, it added.

Questions linger over whether they will qualify for armed security if they live in Canada, a member of the British Commonwealth, or the U.S. Markle previously lived in Toronto, where she still has a home, and Los Angeles. Whether they keep their HRH titles is also not a given, especially given that royal titles would certainly burnish their own personal brands and commercial appeal.

Netflix would give the Sussexes a platform of 158 million paid subscribers and be a coup for the streaming service, which won critical praise for, “The Crown,” chronicling the life of Queen Elizabeth. (Netflix did not respond to request for comment.) Harry has already participated in a documentary on mental health with Oprah Winfrey, a friend of the couple, for Apple TV


The media mogul this week responded to reports that she had helped the Sussexes navigate and negotiate their #Megxit — as the royal scandal has been described in the U.K. press, a riff on #Brexit, the U.K.’s protracted exit from the European Union. “Meg and Harry do not need my help figuring out what is best for them,” Oprah said in a statement, according to The New York Post.

Ashley Pearson, an American-born writer based in London who has been a royal commentator for two decades, said their powerful political and media connections will serve them well. She sees them leveraging their circle of boldfaced names: “Their kind of lifestyle costs a fortune. However, one of the reasons they broke off from the royals is, in part, because they want to build their own brand.”

Pearson alleges that Markle is the driving force to break free from the House of Windsor as the pressure became too great for them to bear. “She had no idea how un-glamorous it really is to be a royal and, when she found out she would be a civil servant in a tiara she was, like, ‘No way.’” The couple unveiled a sleek, new website, which is similar in pitch and tone to Obama.org.


‘One of the reasons they broke off from the royals is, in part, because they want to build their own brand.’

The Sussexes have cut their teeth in broadcast media. In 2017, Harry interviewed Barack Obama when he was the guest editor of BBC Radio 4’s Today program and, last year, ITV in the U.K. broadcast “Harry & Meghan: An African Journey,” which aired in the U.S. on ABC


Another route: The Obamas reportedly inked a book deal for more than $65 million.

While the couple’s break for the border releases them from the drab ribbon-cutting, handshaking daily duties of royal life in the U.K., and should better shield themselves from the jaundiced coverage they have received at the hands of the British tabloids, their bid for financial independence is somewhat more complicated and will not require them to take up full-time jobs.

For a start, they will keep their U.K. base, Frogmore Cottage, their historic Grade II-listed house in Windsor, which was renovated for 2.4 British pounds ($3 million) by the British taxpayer. They have already built a strong royal/celebrity personal brand, breaking the traditional mold of the royal family. Their 2018 wedding was an unusual mixture of Hollywood and English aristocracy.

Achieving financial independence is a status that Markle, 38, can more legitimately claim to have achieved on her own. She has a reported net worth of $6.5 million (5 million British pounds) from her work on the USA Network legal drama “Suits.” Like many former television and film stars, Markle will likely also receive residuals from her seven seasons on that show.

Harry, 35, on the other hand, inherited a sizable fortune after the death of his mother. He inherited approximately 7 million British pounds ($9.2 million) from his mother’s estate, the BBC estimated. His father’s side of the family is far richer — worth more than $88 billion, according to Forbes — including investments, properties, castles and land.


‘Harry & Meghan: An African Journey’ aired in the U.S. on ABC and was sold to several networks around the world.

To be fair, Harry also reportedly earned an annual salary of $45,000 when he served as an officer in the Army Air Corps and approximately $52,000 a year while working as a helicopter pilot for the Army Air Corps, according to separate estimates by Forbes and Fortune magazines based on publicly available figures for salaries in the U.K. army.

The Sussexes rely on Harry’s father, Prince Charles — first in line to the British throne — for the lion’s share of their income. Prince Charles earns $23 million from the Duchy of Cornwall, a private estate with more than $1.3 billion in assets. The Duchy’s financial accounts reveal a total income for fiscal 2017 of 37.2 million British pounds ($48.7 million), up 2.5% on the previous year.

Also see: This entrepreneur landed funding from a male venture capitalist — but she told him to take a hike after he texted her nude selfies

Pearson said Markle struggled to adapt to royal protocol. The Sussexes will no longer be part of the “royal rota,” giving media access to royal appearances. “Much like Gwyneth Paltrow’s Goop, and as Markle previously did with TIG, their personal brand could be worth billions and they know it.” (Forbes recently named reality TV star Kylie Jenner, 22, the youngest self-made billionaire ever.)


Princess Diana, who died in a car crash in 1997, had reportedly long dreamed of starting a new life in the U.S.

It had recently been rumored the couple was planning to up sticks to Canada. Markle lived there while filming “Suits,” and the couple spent Christmas and New Year’s in Canada, reportedly at a waterfront mansion on Vancouver Island. As Canada is part of the U.K. Commonwealth, it may be required to pay for security for the couple and their son, Archie, the Daily Telegraph reported.

Harry’s late mother, Princess Diana — who died at 36 in a car crash in Paris in 1997 while being pursued by photographers — had long battled the relentless, prying eyes of the British red tops, which dissected her every move in the years following her 1981 marriage to Prince Charles, and 1996 divorce. She had reportedly long dreamed of starting a new life in the U.S.

Markle told their ITV documentary last year that she had a difficult time adapting to life with the often critical media attention in the U.K. “I’ve really tried to adopt this British sensibility of a stiff upper lip. I’ve tried, I’ve really tried, I think that what that does internally is probably really damaging,” she said. “The biggest thing that I know is that I never thought this would be easy, but I thought it would be fair.”

Ordinance for open coal market out