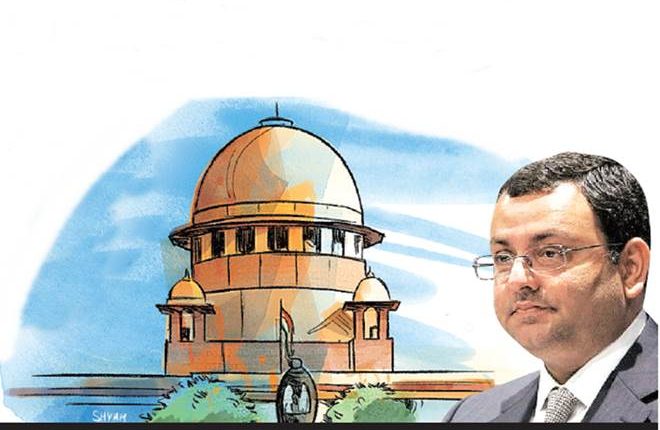 The Supreme Court on Friday stayed in entirety the December 18, 2019 order of the National Company Law Appellate Tribunal (NCLAT) that reinstated Cyrus Mistry as chairman of Tata Sons after calling his removal in October 2016 as “illegal”. The appellate tribunal while terming Tata Group’s actions against Mistry as “prejudicial” and “oppressive” had also termed the appointment of N Chandrasekaran as the new chairman as “illegal”. It had also called Tata Sons’ move to turn into a private company from a public limited one as unlawful, and ordered its reversal.

Staying the order of the appellate tribunal, a bench led by Chief Justice SA Bobde said, “We are inclined to grant notice and stay. There is a basic error. There was no prayer for reinstatement (of Mistry). NCLAT seems to have committed errors in adjudicating. The tribunal seems to lack powers to pass such directions.” However, what still came as a relief to Mistry and his companies who have 18.4% stake in Tata Sons, is that they cannot be forced to sell their stake under Article 75 of the Companies Act till the matter is not disposed of by the SC. The Tatas gave an undertaking to this effect.

While pronouncing its order on December 18, the NCLAT had said while all aspects of its ruling will become operational immediately, the part relating to reinstatement of Mistry as chairman of Tata Sons will take effect after four weeks so that the Tata Group gets a chance to challenge it in the SC. This still meant that Mistry was to be reinstated as a director on the boards of TCS, Tata Sons, Tata Teleservices and Tata Industries, with immediate effect.

Since the Tata Group had challenged the ruling in SC, it postponed the board meeting of TCS to take on record the October-December earnings, which was scheduled for January 9.

On Friday, while opposing any stay on the NCLAT order, Mistry’s lawyer CA Sundaram said, “We are not interested in relief. We are stating on record that we don’t want the relief of reinstatement as chairman. Our contentions is on wrongful removal.” He also submitted an interim “arrangement” before the apex court, that instead of Mistry his “nominee should be placed on board of Tata Sons… Tata Sons should not invoke powers under Article 75 to coerce me (the minority shareholders) to sell the stake”.

However, the CJI told Sundaram, “You may have a point, but that needs to be argued. You (Mistry) haven’t been in the saddle for a long time. Does it (stay order) hurt you… How does it hurt you today?”

Arguing on behalf of the Tata Group, senior counsel Harish Salve said that there is a lot to be said about the quality of the NCLAT’s order. On January 5, Mistry had issued a statement saying he was not interested in returning to Tata Sons as its chairman and was only fighting for his rights as a minority shareholder and for a seat on the board of Tata Sons.

In his appeal in the appellate tribunal, through his firms Cyrus Investments and Sterling Investments, Mistry had contended that his removal as chairman was arbitrary and was a clear case of oppression of minority shareholders at the Tata Group.  He had also alleged that Tata Group chairman emeritus Rata Tata and Tata Trust’s Noshir Soonawala acted as “super directors” and made inappropriate interference in the affairs of the group.

Mistry through his firms had also sought proportionate representation on Tata Sons’ board, no interference from the trustees of Tata Trusts who hold 66% in Tata Sons, reversal of Tata Sons into a public limited company and protection from any forceful transfer of shares held by his family in Tata Sons. He had contended that the articles of association of Tata Sons are loaded against minority shareholders, which restricts his firms from freely selling their shares in the market.