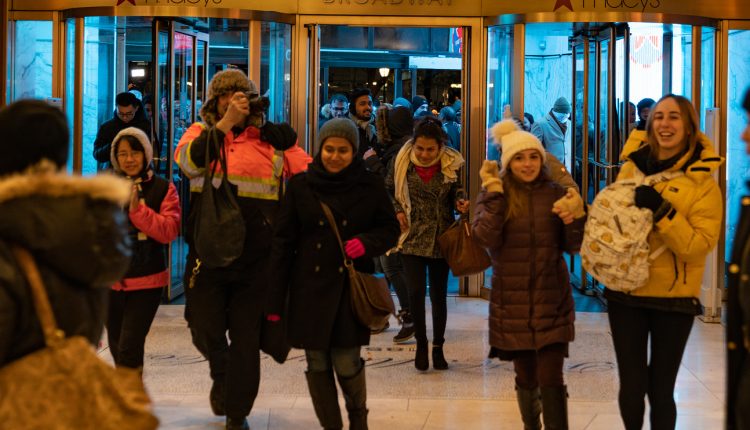 As long as Americans keep spending, the economy is all but certain to sidestep a recession in 2020 for a record 11th straight year.

The crucial question is, can they? And the answer seems to be, quite clearly, yes.

What’s put a sturdy foundation under the economy is the best labor market in decades. The U.S. added 145,000 new jobs in December to cap off the ninth straight year in which the economy created more than 2 million new jobs.

All the new hiring over the last decade has pushed the unemployment rate down to a 50-year low of 3.5%. If it goes any lower, the jobless rate would hit a bottom last reached during the Eisenhower presidency in the early 1950s.

The pace of household spending in 2020, however, could take a step back if the recent deterioration in wage growth persists.

The increase in hourly pay over the past 12 months fell below 3% in December for the first time in a year and a half, reflecting a shift in hiring toward lower paying jobs. Yearly wage growth peaked at 3.4% last spring and has been drifting lower ever since.

The surprising slowdown in the growth of worker wages will “make it harder for consumers to keep spending at their 2019 pace in 2020,” said Scott Anderson, chief economist at Bank of the West.

But spend they will.

Secure in their jobs, Americans are still quite confident in the economy, surveys show. They appeared to have boosted spending during the holiday season at decent clip, unlike a year ago when the government was partially shut down and the stock market briefly tumbled on fears of a recession.

Economists polled by MarketWatch predict retail sales in December likely rose around 0.4%. The government’s retail postmortem, the capstone in a big week of economic reports, is published next Thursday.

If that’s not enough, the Federal Reserve cut the cost of borrowing in the second half of last year. Stocks


keep hitting fresh record highs. And the Trump administration struck a deal with China that reduces to a simmer a trade dispute between the world’s two largest economies that nearly boiled over last summer.

“The economy looks to head into the new decade with a little more zip than we thought,” said senior economist Sal Guatieri of BMO Capital Markets. “While this may not foreshadow another decade of uninterrupted growth, it should keep recession fears at bay.”

The Fed is widely expected to keep U.S. interest rates low for quite some time, perhaps another year or even longer. The erosion in wage growth is just the latest sign showing that inflation poses little or no threat to the economy despite the tightest labor market in half a century.

A trio of readings this week on consumer, wholesale and import prices are all expected to reinforce the idea that inflation remains low — too low for many senior Fed officials. They’d like to see inflation creep above their 2% target and stay there for awhile.

For now it doesn’t appear to be in the cards.

The state of heavy industry is also likely to disappoint in a handful of surveys of manufacturers. They have borne the brunt of the trade war with China.

Many firms scaled back production, investment and hiring in 2019 to cope with lower exports or higher costs of raw materials. Even the partial U.S. trade agreement with China probably won’t give them much of a lift in light of the wide rift between the two economic superpowers.

In short, 2020 is shaping up to be much like 2019: Consumers once again hold the key too how well the economy performs.