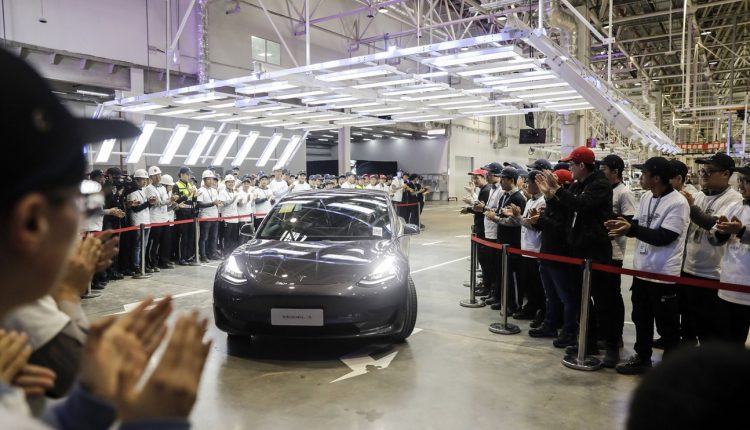 Tesla Inc. stock’s record setting streak came to an end on Thursday, with one analyst calling it fully valued after its “meteoric” run-up.


shares lost 2.2% to end at $481.34 on Thursday amid gains for U.S. equities overall. The stock ended at a record $492.14 on Wednesday, the latest in a string of high-water marks going back to mid-December.

Thursday’s losses were the first for the stock in 2020.

“In our view, (Tesla) shares now appear fully valued after a meteoric run-up since bottoming at $177/share last June and are not reflecting various near-term risks,” said Garrett Nelson, an analyst with CFRA, in a note Thursday.

Nelson lowered his rating on the stock to sell, from hold, citing the likelihood that Tesla’s new China plant would weigh on margins in the first half of the year and that U.S. sales could be hit by the phasing out of federal tax credits.

“We also see heightened risk of equity issuance, which would help de-risk the balance sheet but be dilutive to EPS,” he said. “With (Tesla’s) market cap now exceeding General Motors Co.


) combined despite having only about 3% of joint vehicle sales volume, we think investors have given (Tesla) plenty of credit for future growth, raising execution risk,” he said.

Also Thursday, analyst Ben Kallo at Baird also downgraded his rating on the stock to the equivalent of hold. After several years rating Tesla the equivalent of a buy and “contentious arguments” with Tesla bears, “we recommend profit taking,” Kallo said.

“We think risk/reward is more balanced following recent stock appreciation; expectations (particularly on the buyside) appear to be fairly calibrated and we think the positive estimate revision cycle is in its latter stages,” he said. “That said, we would not short the stock and remain positively biased over the long run.”

Earlier this week, analysts at Argus Research and Credit Suisse raised their price targets on Tesla, although Credit Suisse kept a sell rating on the stock.

On Tuesday, Chief Executive Elon Musk made waves by pulling some meme-ready dance moves at an event at the Shanghai area factory showcasing the delivery of the first made-in-China Model 3 sedans.

Tesla’s stock rally has pushed the Silicon Valley car maker’s market capitalization to more than $86 billion, which is higher than Ford’s at its peak — just under $81 billion in 1999, or some $124 billion in today’s dollars.

Tesla has been the No. 1 U.S. auto maker in terms of market value off and on in the recent past, but it is the first time its market capitalization has topped Ford’s at its peak valuation. Ford is currently valued at around $36 billion, and GM at about $50 billion.


and the Dow Jones Industrial Average