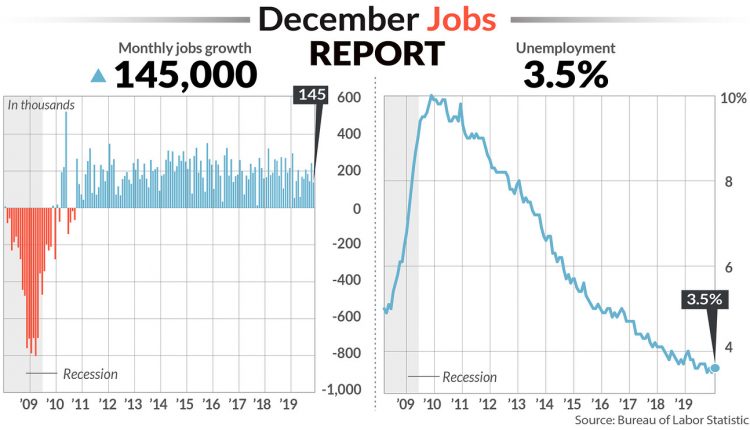 The numbers: The economy created 145,000 jobs in the final month of 2019 to cap off the ninth straight year in which employment gains topped the 2 million mark, but workers still aren’t reaping a windfall from the strong labor market in the form of rapidly rising pay.

The increase in new jobs fell short of the 165,000 forecast of economists polled by MarketWatch. Wall Street was expecting a drop-off, however, after a surprisingly robust 256,000 gain in the prior month.

What’s more, a broader measure of joblessness known as the U6 rate fell to 6.7% to mark the lowest level on record.

The sturdiest labor market in decades has shielded the economy from a broad slowdown in global growth triggered in part by the U.S. trade war with China. Skilled workers are so hard to find companies are afraid to lay anyone off in case the economy speeds up.

In an odd development, though, companies have managed to avert spiraling labor costs despite a talent shortage. The year pace of hourly wage growth slowed in December to the weakest pace in a year and a half.

Before the December employment report, premarket trading pointed to a higher opening for the stock market.

Read: Jobless claims fall for 4th week in a row to 214,000, back near postrecession lows

What happened: Most of the new jobs are being created in the large service side of the economy. Retailers created 41,000 jobs, hotels and restaurants boosted staff by 40,000 and the health-care industry added 28,000 workers. Construction companies hired 20,000 people.

The smaller goods-producing part of the economy has mostly treaded water. Manufacturers lost 12,000 jobs in December, putting the increase for the entire year at a meager 46,000.

The economy created 2.11 million jobs for the full year, down from 2.7 million in 2018. Much of the decline reflects a slower U.S. economy and a slump in manufacturing, but the ultratight labor market has also made it harder for companies to fill open jobs.

Yet even with skilled workers in such short supply, wage growth has leveled off. Average hourly pay rose just 3 cents in December to $28.32.

Wages rose steadily for three years before peaking early last year. That suggests companies are resorting to other methods to attract or retain workers in lieu of better pay.

Employment gains for November and October, meanwhile, were reduced by a combined 14,000.

Big picture: The picture that emerges of the U.S. labor market at the end of 2019 is still a bright one. While hiring has slowed, the pace of layoffs and unemployment sit at or near 50-year lows. Almost anyone who wants a job can find one.

The strong labor market has given consumers, the main engine of U.S. economic growth, the confidence to keep spending, extending a record expansion in its 11th year.

Most economists see little risk of recession in 2020 after the Federal Reserve cut interest rates and trade tensions between the U.S. and China eased.


were set to open at or near records.