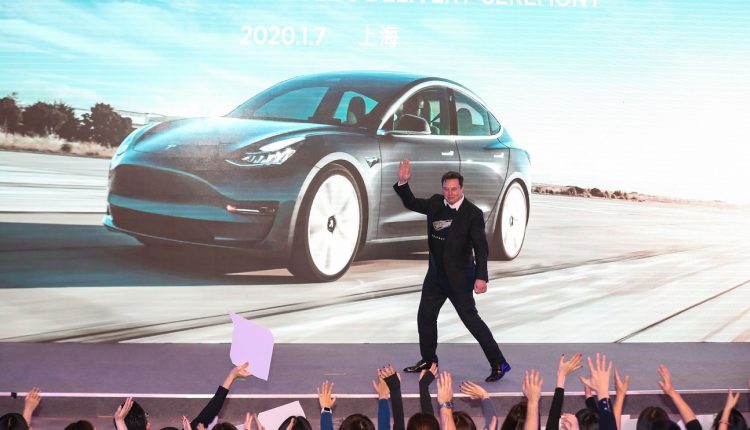 Now that U.S.-Iran tensions have cooled a bit, it may be time to revisit predictions from some strategists last year that said equities are primed for big gains in the first quarter.

They may have been onto something. The Nasdaq Composite


nailed a record close on Wednesday, while the S&P 500


could be headed for one today, judging by positive futures action. News that China’s Vice Premier Liu He will sign a “Phase 1” trade deal in Washington next week is also inspiring investors.


whose market capitalization is now bigger than Ford Motor’s at its peak.

That brings us to our call of the day from Baird analysts Ben Kallo and David Katter, who have downgraded Tesla to a neutral rating after a longtime overweight, or bullish position, on the shares. In a note to clients, they said it is time to cash in on some of the big gains the automobile maker has seen.

“We are moving to the sidelines, admittedly battle-weary after a hard-fought several years, including [approximately] 20% outperformance over the last year,” said the team, who spoke of “contentious arguments with (evidently) high-conviction bears.”

Note the analysts lifted their share target to $525 from $355—shares closed just shy of $500 on Wednesday.

They said risk/reward for Tesla shares is looking more balanced following recent gains—up 113% in the last 6 months, nearly 18% year-to-date. And while some analysts have been turning increasingly optimistic on the company’s future, they think that process may be in the latter stages.

Baird analysts added that Tesla stock is now reflecting lots of progress the company has made over the past two years, both operationally and financially. They mentioned such pluses as the new Shanghai factory and an “extremely compelling product line,” including the Model Y, the Tesla Semi Roadster and the Pickup.

But they stopped short of suggesting investors bet on shares to fall over the long run. They said even amid bearish arguments by some, “the company has continued to grow and execute (albeit on a slower timeline than projected, at times) and we expect this will continue.”


futures are higher, with European stocks


on track for a record session after Wednesday’s upbeat day on Wall Street. Asian markets


is pulling back from what’s been a big run this week.


shares a year ago would have doubled their money, according to this chart tweeted by Byron Lotter, portfolio manager at Vestact Asset Management.

If you had bought Apple shares exactly one year ago you would have doubled your money. And that excludes dividends. Quite astonishing considering the size and scale of the business. pic.twitter.com/yRzehldC1q

Lotter said while some attribute the share rise to renewed popularity for Apple products in China, he thinks its services division is a star player. He cited a company statistic that shows $1.42 billion was spent on the App store between Christmas and New Year’s Eve, while he’s also positive on Apple Music and Apple TV. An “incredible business…still has legs,” he told clients in a note.


are tumbling after the housewares retailer reported a big quarterly miss and pulled its outlook.


Ahead of Friday’s nonfarm payroll data, we’ll get weekly jobless claims before the open.

Democratic presidential candidate Mike Bloomberg on why you should vote for him.

Need to Know starts early and is updated until the opening bell, but sign up here to get it delivered once to your email box. Be sure to check the Need to Know item. The emailed version will be sent out at about 7:30 a.m. Eastern.