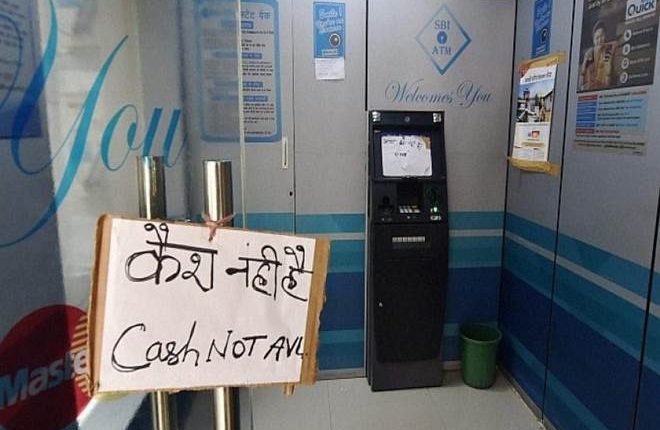 Banking services in most parts of the country were paralysed on Wednesday due to a day-long strike call given by 10 major trade unions against the government’s “anti-people” policies. Various states like Maharashtra, Rajasthan, Odisha, Punjab, Haryana, Telangana, Kerala, West Bengal and Assam witnessed disruptions in banking and financial services.

Several ATMs went dry by the evening as people rushed for cash withdrawal as they had prior information about the strike. There is usually heavy demand for cash during the first 10 days of a month due to several reasons, a senior bank official said.

In many companies, 7th is the pay day so there is huge rush for cash withdrawal till 10th of the month, the official added. Employees of public sector insurance companies and the RBI too participated in the strike.

The strike was 100 per cent as two unions including AIIEA too participated, GIEAIA General Secretary K Govindan said, adding, the unions are opposing proposed merger of general insurance companies and labour laws amendment.

All India Reserve Bank Employees Association (AIRBEA) and All India Reserve Bank Workers Federation (AIRBWF) also participated in the strike. “We have been raising concerns over the outsourcing of job from the RBI which has impacted supervision and inspection work of the central bank,” AIRBEA General Secretary Samir Ghosh said.

Around 12,000 workmen staff of the RBI from 19 offices across the country, including from the central office in Mumbai, went on strike. It affected various departments including currency management, government and public accounts.

“We have flagged our concerns about the issue of shrinking strength of the employees. In the 90s we used to have 42,000 employees which has reduced to 14,000 currently,” AIRBEA said. The shortage of staff is also affecting the RBI’s supervision capabilities, the union claimed.

Banking services across Maharashtra were hit on Wednesday as nearly 40,000 bank employees, including 10,000 officers joined the stir. The strike evoked partial response in Punjab and Haryana. Banking operations were affected in Rajasthan too. However, the country’s largest lender State Bank of India (SBI) and private sector banks remained opened.

Banking services like cash withdrawal and deposits were affected at several bank branches where employees did not turn up for work and instead chose to sit outside on protest. Other banking services like cheque clearing and instrument issuance were also impacted. However, digital transaction remained unaffected.

According to AIBEA General Secretary C H Venkatachalam, the strike was 100 per cent in many parts of the country as branches were closed. “We have been opposing government policies on bank merger, privatisation…and other wage-related issues,” he said.

Last year, the government announced merger of 10 banks into 4. “Thus 6 banks –Andhra Bank, Corporation Bank, Oriental Bank of Commerce, Syndicate Bank, Allahabad Bank, United Bank of India are facing threat of closure. This is a wrong step and will affect customer service, employment and jobs. This will not help in recovery of bad loans,” he said.

Trade unions INTUC, AITUC, HMS, CITU, AIUTUC, TUCC, SEWA, AICCTU, LPF, UTUC along with various sectoral independent federations and associations had adopted a declaration in September last year to go on a nationwide strike on January 8, 2020. The trade unions had claimed around 25 crore people would participated in the strike.