‘International face of resistance’: Two big reasons why Qassem Soleimani was revered by the Iranian people 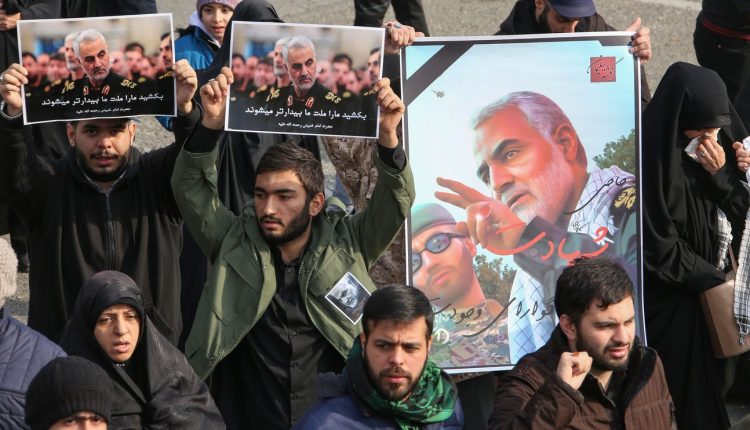 While some U.S. lawmakers have branded Qassem Soleimani a terrorist, the late Iranian general’s significance to the Iranian people was on full display on state TV and in the streets of Tehran.

Many Iranians reacted with shock and anger to the killing of Soleimani, the leader of the foreign wing of Iran’s Islamic Revolutionary Guard Corps (IRGC), by a U.S. airstrike at Baghdad’s international airport Friday.

In the immediate aftermath of the general’s killing, which the U.S. Department of Defense confirmed Friday had been authorized by President Trump, multiple media outlets and reporters in the Middle East reported that Iranian state television had stopped all scheduled broadcasts and, instead, cut to the Islamic prayer for the dead: “From God we came, and to God we return.”


‘He has remained above factional conflicts in Iran and is respected by a variety of segments of the Iranian elite, and he enjoys popularity in Iran as a nationalist symbol.’

Arang Keshavarzian, a professor in New York University’s department of Middle Eastern and Islamic Studies, put the reaction of Iranian media, government and people in context: “He has no religious authority or social standing,” he said. “He, however, has had a central position in the IRGC for over 20 years and is trusted by the Ali Khamenei and other leaders of the Islamic republic.”

“What distinguishes him from most IRGC and military leaders is twofold,” Keshavarzian told MarketWatch. “He has remained above factional conflicts in Iran and is respected by a variety of segments of the Iranian elite, and he enjoys popularity in Iran as a nationalist symbol who helped repel the Iraqi invasion in the 1980s and stand up to U.S. aggression since then.”

Commuters in the subway in Tehran chanting death to America, death to Israel pic.twitter.com/BP7kJA6tWH

Anoush Ehteshami, professor of international relations in the School of Government and International Affairs at Durham University in the U.K., said Soleimani had also potentially been a successful candidate for president. “Three previous IRGC commanders tried to win the presidency and they failed. Solaimani was the exception, and would have made a popular president.”


‘President Trump just tossed a stick of dynamite into a tinderbox, and he owes the American people an explanation of the strategy and plan to keep safe our troops and embassy personnel.’

Soleimani was born in 1957 and spent nearly his entire adulthood in Iran’s Revolutionary Guard, which he joined after the 1979 revolution in Iran, according to the Wall Street Journal. Soleimani served since 1998 as major general of the Quds Force, which has been described as “analogous to a combined CIA and Special Forces,” according to a 2013 New Yorker article.

In a commentary, Iran’s state TV called Trump’s order to kill Soleimani “the biggest miscalculation by the U.S.” in the years since World War II, the AP reported. “The people of the region will no longer allow Americans to stay,” the statement said.

Joe Biden, a candidate for the Democratic presidential nomination, tweeted that Soleimani “supported terror and sowed chaos.” “President Trump just tossed a stick of dynamite into a tinderbox, and he owes the American people an explanation of the strategy and plan to keep safe our troops and embassy personnel, our people and our interests,” he said.

Also see: Why Soleimani’s death is a major development in U.S.-Middle East relations

On Friday, Trump tweeted a different view of Soleimani than was presented on state TV. “While Iran will never be able to properly admit it, Soleimani was both hated and feared within the country,” he wrote. “They are not nearly as saddened as the leaders will let the outside world believe. He should have been taken out many years ago!”


were up 3.6% at $63.38 mid-morning Friday, hitting multi-month highs, while international oil benchmarks