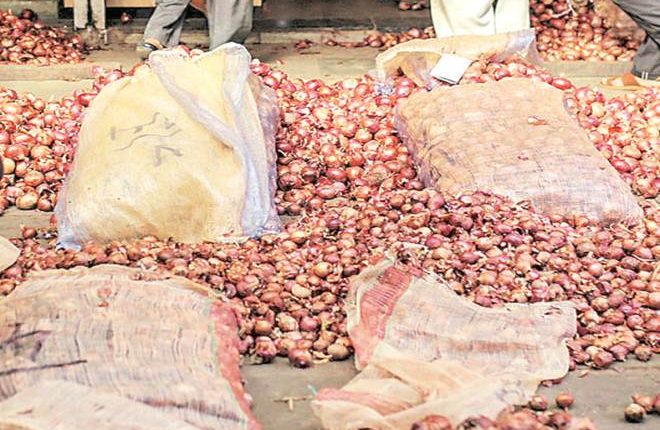 MahaFPC managing director Yogesh Thorat said the federation had signed agreements with 9 Farmer Producer Companies (FPCs) initially and another 9 FPCs had come on board last week.

This is a joint project proposed by Nafed and MahaFPC with contribution of 25 FPCs in the state to execute a Public Private Partnership (PPP) Integrated Agriculture Development (PPP-IAD) project under the Rashtriya Krishi Vikas Yojana (RKVY-RAFTAAR) for building storage capacities for onion and setting up marketing infrastructure.

The Rs. 25-crore project will see the government investing 50% while the rest will be raised by Nafed and FPCs.

Thorat said the project will enable FPCs to remove monopoly of traders in onion markets. According to him, the project will see them developing markets from onion excess to deficit regions.

Thorat pointed out that MahaFPC has adopted a long-term approach by signing a JV with Nafed for a period of 15 year wherein Nafed and MahaFPC will work to create strategic businesses for Farmer Producer Companies (FPCs) in onion by building storage capacities and developing marketing infrastructure.

The project envisages building storage infrastructure for 25,000 tonne of onion in the state wherein each FPC will establish a cluster on a 1-1.5 acre land parcel for 1,000 tonne each. Each cluster will be set up for Rs. 1 crore where 20% of the investment will come from the FPC (from around 100 farmers in each FPC), 25% from Nafed, 5% from MahaFPC and the remaining funds from the state government under the RKVY scheme, Thorat said.

Each cluster will contain onion chawls (warehouses) grading houses and weighing bridges. Agreements were initially signed with 16 farmer producer companies and we are now identifying land for the remaining 9 FPCs in the state for the project, he added.

Approvals from the government have already come in and work on the project will commence from the second week of January and begin from March 2020, Thorat said. This coming season, the Centre, under the Price Stabilisation Fund, is looking at procurement targets for 25,000 tonne of onion and MahaFPC would be a major player in this, he pointed out.

This season, MahaFPC had entered into a joint venture with Nafed to procure around 25,000 tonne onion under the Price Stabilisation Fund from Lasalgaon — the largest onion wholesale market in the country — for release during lean periods. Nafed, in one of its biggest procurement exercises, had procured over 30,000 tonne onion from Maharashtra this season. MahaFPC was told to procure 25,000 tonne in March. The onions came from seven districts — Nashik, Pune, Ahmednagar, Aurangabad, Solapur, Osmanabad and Jalna.

The FPC connected with 39 farmer producer companies which helped in procuring onions from 3,500 small and marginal farmers.

A large part of the procurement had reached Delhi to be sold through Mother Dairy’s fruit and vegetable outlets Safal.

MahaFPC is looking at setting up specialty commodity markets and the business model would be supply the commodity to major retail players in addition to getting into inter-state trade, exploring schemes at the Centre to get into the mechanization aspect of commodities by establishing the backward and forward linkages, grading, sorting and packing houses in the long term. A couple of years ago, MahFPC had decided to tap the inter-state route to gain access to newer markets. Accordingly, the farmer body federation has signed a MoU with the Kerala State Horticultural Products Development Corporation (Horticop) to supply onion and pulses to Kerala. MahaFPC traded at least 5,000 tonne of onion outside the state through this route. MahaFPC and Horticop explored ways to establish warehousing facilities at Tiruvananthpuram and Kochi. Since Kerala does not have the concept of Agriculture Produce Market Committees, the FPC had decided to tap government based bodies to establish market linkages in the state.